Jewish politician says Kosher Nostra informant "should have been killed"

On a Jewish radio program Saturday night a former assemblyman from Borough Park, Sam Hirsch, said Dwek should face stiff retribution because of his role as an informant, the halachic concept of a moser.

“This person should have been killed,” said Hirsch, when asked by “Talkline” host Zev Brenner whether Dwek’s acts were comparable to those of Bar Kamsa, the man related in the Talmud as having incited tensions between the Romans and Jews leading to the destruction of Jerusalem in 70 CE. Hirsch then said that Dwek and other informants should be ostracized from the community.

(...) Even without the order of a Jewish law court, one may kill a person who has certainly set out to inform on another, prior to their act of informing, as informing poses a danger to the one who is informed on. Once a person informs, one may not kill the informer as punishment for the sin and one may not steal from an informer (unless taking his property will stop him from informing). One who regularly informs may be killed without warning.

Rabbi: Kill those who report Judaic rape of children

Do you want this blog to continue?
Urgent: We are soliciting donations from our readers, without which our work cannot continue. Please send your gift today. We're not kidding! Any donation in any amount which you can send is desperately needed.
Our information is priceless. Please give something today to support it. Don't delay.
Thank you.
____________________________ 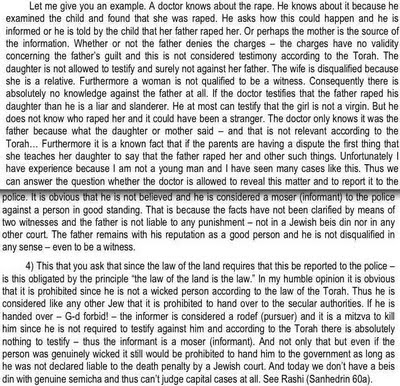 Synopsis of the ruling of the Ungvarer Rov, Rabbi Menashe Klein, in the passage above:

The author of this depraved ruling is Rabbi Menashe Klein, a contemporary Hasidic "Gadol" (great rabbi of his generation), who heads the Ungar kehillah Yeshiva Bais Shearim, in Boro Park, Brooklyn, New York.