The Case for Bombing Iran
I hope and pray that President Bush will do it.
BY NORMAN PODHORETZ
May 30, 2007

Mr. Podhoretz is editor-at-large of Commentary. His new book, "World War IV: The Long Struggle Against Islamofascism", will be released by Doubleday on Sept. 11. This essay, in somewhat different form, was delivered as an address at a conference, "Is It 1938 Again?", held by the Center for Jewish Studies at Queens College, City University of New York, in April.


Not so George W. Bush, a man who knows evil when he sees it and who has demonstrated an unfailingly courageous willingness to endure vilification and contumely in setting his face against it. It now remains to be seen whether this president, battered more mercilessly and with less justification than any other in living memory, and weakened politically by the enemies of his policy in the Middle East in general and Iraq in particular, will find it possible to take the only action that can stop Iran from following through on its evil intentions both toward us and toward Israel. As an American and as a Jew, I pray with all my heart that he will.

A senior foreign policy adviser to the Republican frontrunner Rudy Giuliani has urged that Iran be bombed using cruise missiles and "bunker busters" to set back Teheran’s nuclear programme by at least five years.

The tough message at a time of crisis between the United States and Iraq was delivered by Norman Podhoretz, one of the founders of neoconservatism, who has also imparted his stark advice personally to a receptive President George W. Bush. 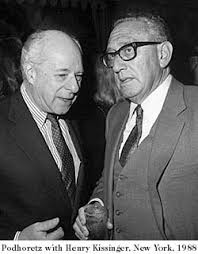 Norman Podhoretz and Henry Kissinger
Podhoretz is a founder of neoconservatism

"None of the alternatives to military action - negotiations, sanctions, provoking an internal insurrection - can possibly work," said Mr Podhoretz.

"They’re all ways of evading the terrible choice we have to make which is to either let them get the bomb or to bomb them."

In an interview with The Daily Telegraph, Mr Podhoretz said he was certain that bombing raids could be successful.

"People I’ve talked to have no doubt we could set it back five or 10 years. There are those who believe we can get the underground facilities as well with these highly sophisticated bunker-busting munitions."

Although Mr Podhoretz said he did not speak for Mr Giuliani, the former New York mayor whom he briefs daily appears to have embraced at least the logic of his hard-line views.

During a visit to London last month, Mr Giuliani said Iran should be given "an absolute assurance that, if they get to the point that they are going to become a nuclear power, we will prevent them or we will set them back five or 10 years".

Mr Podhoretz said: "I was very pleased to see him say that. I was even surprised he went that far. I’m sure some of his political people were telling him to go slow ... I wouldn’t advise any candidate to come out and say we have to bomb - it’s not a prudent thing to say at this stage of the campaign."

But Mr Podhoretz’s 77 years and his position as a pre-eminent conservative foreign policy intellectual means he can not only think the unthinkable but say the unsayable.

"My role has simply been to say what I think," he said, explaining that he takes part in weekly conference calls and is in daily email contact with the Giuliani campaign.

He is the most eminent of a clutch of uncompromisingly hawkish aides assembled by Mr Giuliani. They include Daniel Pipes, who opposes a Palestinian state and believes America should "inspire fear, not affection", and Michael Rubin, a former Pentagon official who has argued that Condoleezza Rice’s diplomacy is "dangerous" and signals American "weakness" to Teheran.

"Does Rudy agree with me?" Mr Podhoretz asked rhetorically. "I don’t know and I don’t wish to know." But he added that "Rudy’s view of the war is very similar to mine."

Mr Podhoretz’s thesis is that the war on terror is in fact World War Four and that the 42-year-long Cold War should be more properly described as World War Three.

Awarded the Presidential Medal of Freedom, America’s highest honour, by President George W. Bush in 2004, Mr Podhoretz later sought a rare one-on-on audience with the US commander-in-chief. They met in New York’s Waldorf Astoria hotel in the spring.

The author of the recent World War IV: the Long Struggle Against Islamofacsism spent about 35 minutes outlining his case for air strikes against Iran as Mr Bush’s then chief adviser Karl Rove took notes.

"Whether I had any effect on him I truly don’t know but I sure tried my best to persuade him," he said.

"He was very cordial. He was warm. He listened. He occasionally asked a question as I made the case but he was truly poker faced."

Mr Podhoretz left the meeting unshaken in his belief that Mr Bush would attack Iran before he leaves office.

- Why Does Norman Podhoretz Hate America? by Michael Scheuer, Sept 26 2007

- Zion-power and War: From Iraq to Iran. The Deadly Embrace.