Michael Collins Piper, The Golem
Chapter Fourteen
Did Bill Clinton "Turn His Back" on Israel?
The Zionist Intrigues Behind "Monica-Gate"

On a visit to Washington, D.C. in 1998, Netanyahu hooked up with Jerry Falwell at the Mayflower Hotel the night before [Netanyahu's] scheduled meeting with Clinton. "I put together 1,000 people or so to meet with Bibi [Netanyahu] and he spoke to us that night," recalls Falwell. "It was all planned by Netanyahu as an affront to Mr. Clinton."...

The next day, Netanyahu met with Clinton at the White House. "Bibi told me later," Falwell recalls, "that the next morning Bill Clinton said, I know where you were last night." The pressure was really on Netanyahu to give away the farm in Israel. It was during the Monica Lewinsky scandal Clinton had to save himself, so he terminated the demands [to relinquish West Bank territory] that would have been forthcoming during that meeting, and would have been very bad for Israel."

What Falwell did not mention—at least as reported by Vanity Fair—is that his meeting with the Israeli leader took place on the very evening before the mass media in America broke open the Monica Lewinsky scandal with much fanfare.
Nor did Falwell mention—as this author pointed out at the time and as we've noted again here in these pages— was that one of Netanyahu's leading American publicists, neo-conservative power broker William Kristol, was the first American media figure to publicly hint (in the days before the scandal was officially unveiled) that there were forthcoming revelations regarding a White House sex scandal that was about to be unveiled to the detriment of William Jefferson Clinton.
The story of Bill Clinton's imbroglio with Israel is probably something Bill and Hillary Clinton would prefer be forgotten, but the lesson of Israel's success in using such a scandal as the Lewinsky affair to batter President Clinton is not something that Israel and its American lobby are likely to forget. Should Hillary Clinton somehow assume the presidency, she must be prepared to face the consequences.


Michael Collins Piper, The Confessions of an Anti-Semite--The First Ever Critical Analysis of the Linguistic Legerdemain Underlying the Propaganda Techniques of the New World Order : 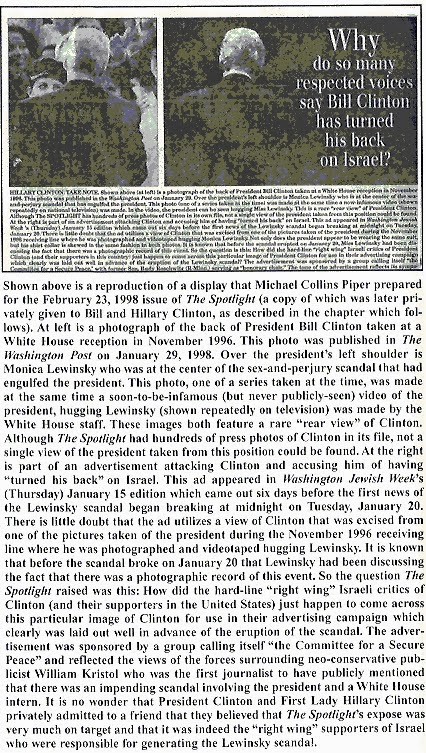 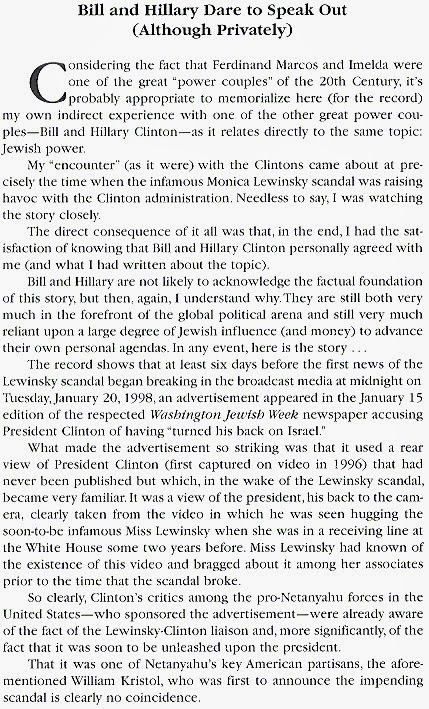 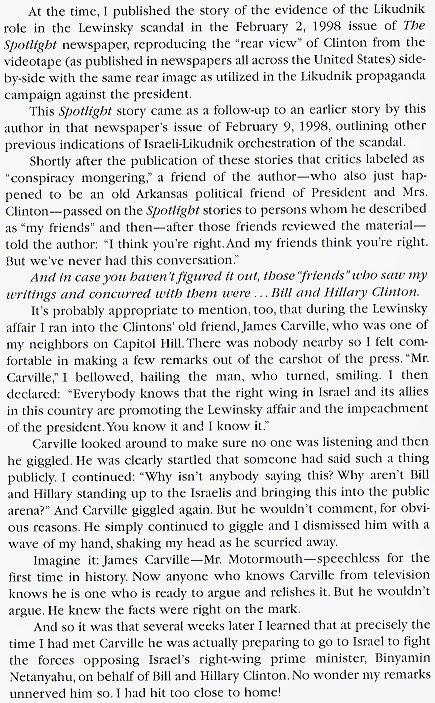